FAQs and Howtos for electrical, lighting, Audio and other electronic projects or tweaks for your MX5.

Due to my previous topic becoming somewhat of a joke fest I have decided that I would post the solution seperately so other users do not have to wade through all the bad puns to find an actual answer.

Several months ago I undertook the task of finding a way to make my dials light up blue.

My first step was to replace the standard black dial faces with white ones so the light would shine through the whole dial and not just the numbers. The replacements I got can be found here.

Next it was recomended to me to use blue silicone bulb sleeves (at a cost of about $4) made by Narva to cover the standard yellow/white bulbs. THIS DOES NOT WORK! Do not use these sleeves, all they accomplished was to change the yellow/white light to an unattractive yellow/green light.

I then tried to remedy this by changing out the standard light for a Narva ultra-white light (at a cost of $15). All this served to do was make the light slightly more green than yellow....

Weeks later I stumbled upon a NZ site that sells all manner of LEDs and bulbs. Here I found these lights (at a cost of $8 each). They arrived two days later by courier and I installed them only moments ago. I am very happy with this product as it creates a real blue light not a washed out white or green. I would recomend to anyone attempting a similar undertaking to go straight to ledbulbs.co.nz instead of wasting time and money on other, cheaper fixes.

All up I spent nearly 3 months and over $100 trying to find a solution.

You may notice that the blue does not diffuse very evenly. This is because of the perspex mounts that the dials screw into. The standard mounts are designed to direct the light at the area with the numbers because the standard dials only light up at the numbers. I am currently working on some custom mounts that will diffuse the light correctly.

Most of you should already be familliar with this site. The owner, Ross, is based in Hamilton. If you need a part replaced send him a pic and he no doubt has a spare on hand to courier to you!

Based in Christchurch. This company - ironically also run by a guy named Ross - has all kinds of LED lights and interesting things to buy. If you aren't sure that the kind of light you want will work just drop him an email and he will get back to you with everything you need to know! 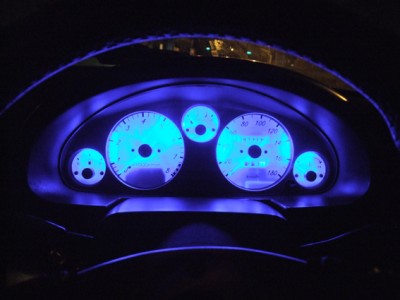 How many led bulbs did you end up using?

4, one for each existing light. When you take the dash apart, assuming you have a Mk1, there will be about 8 light holders. Four of these holders are black and the other four are a dark green. The dark green ones hold the bulbs that light up the dials. (Ignore the other ones as these are for things like indicators and hand brake).
Top

sprsta
I have stars, you haven't. Deal with it

Hojo wrote:
All up I spent nearly 3 months and over $100 trying to find a solution.

forgot to add the $75 for the dial covers or did you not end up using them?

I did indeed end up using the dial covers. I will try to post a pic in the next few days.
Top

zorruno
Black is the new black.

That's great thanks Hojo - I'll move it to the Howtos section when you have posted pics etc.

sprsta
I have stars, you haven't. Deal with it

i found this site if you want to make your own guage faces
http://www.revlimiter.net/mods/gauges.html

Users browsing this forum: No registered users and 1 guest